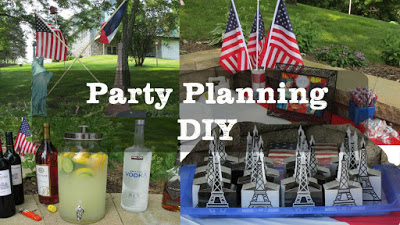 *Items were provided by Oriental Trading.  The opinions are all my own.

Hey everyone!  It’s Mona here at Craft Klatch.  Today we are doing a little outside the box party planning.

Our niece is getting married, in the fall, to a gentleman from France.  They live in New York and most of the family lives in Illinois, so there are limited opportunities to throw her a shower.  After much discussion, it was decided to throw an informal shower/family party on the Fourth of July, since they were going to be in town.

Giving it some thought, it was decided it would be a France Meets the U.S. theme.  That would honor the heritage of both countries AND as luck would have it, France’s flag is also red, white and blue!  PERFECT!  I’m going to take you through how it all came together.

I had quite a time finding any good French party themed items that weren’t pink.  When I began to panic, I realized Oriental Trading!  They have just the right thing for EVERY occasion!  Watch the video to see how I was able to incorporate my crafts, along with some great decorations from Oriental Trading!!
See how it came together here:

I just wanted to show you that you can combine different themes to make a fun party and personalize it to your guests.  Some of my recent crafts and DIYs came in quite handy!

Thanks for stopping by!  Remember Oriental Trading when
you plan your next party!  Happy Crafting and stay safe!


Here are some of the great Oriental Trading products you saw in the video: