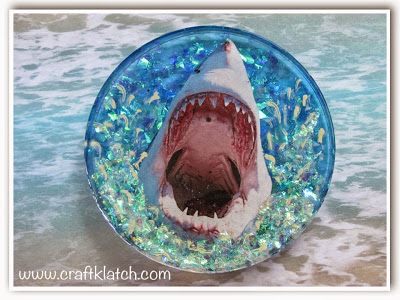 I don’t know if you like Shark Week on TV or not, but I do!  I don’t have as much time to watch it as I would like, but I do catch some of the programming.  I am fascinated by sharks and I don’t know why.  I would like to see one in the wild, but I think I’d like to be standing on shore or be in a large boat when I do!  If I was guaranteed it was safe, I’d try a shark cage, but I don’t….. seems like they might not be.

Here is my coaster for this week, in honor of Shark Week!

–  Coaster mold
–  Resin – I used Easy Cast, but Envirotex Lite works well too.  For more information about both, go to www.eti-usa.com.
–  Cello glitter – blue and white (available at Michaels and Hobby Lobby)
–  Clear Mod Podge
–  Picture of a shark, sized and cut out
–  Nail polish – light pearly blue and white (optional and acrylic paint could be substituted)
–  India ink or resin dye

Here are some items that you might find helpful, incase you wanted to give it a try.  I was asked about the printer I use, so I included that too:

Here is the video tutorial:

Directions:
1.  Mix your resin according to the package directions.  You need enough to cover to bottom of the mold.  Mix in one drop of blue india ink and mix.  Add blue cello glitter and mix well.
2.  Pour into the coaster mold and help it spread around  You will likely have a lumpy surface, so once it has set, add another layer of resin tinted with blue ink.  Make sure it is enough to give it a flat surface.  Allow to cure at least 12 hours.
3.  Cut out a picture of a shark.  The technique I did works with magazine photos, laser printer photos and copy photos.  This will not work with inkjet.  I don’t do much with inkjet and I know there are ways to decoupage with inkjet.  If you only use inkjet, do a search and see what you can come up with!
4.  Place your picture in water for a few seconds.  It will begin to curl.  Take it out and carefully dab it dry with a towel.
5.  Take your Mod Podge and paint the surface of your coaster (the whole top).  Take Mod Podge and brush it on the back of your shark photo.
6.  Place the shark photo down on the coaster.  With more Mod Podge on your brush, brush it down.  Put some Mod Podge on your finger and gently rub it down, which will help remove any trapped bubbles.  Again brush some Mod Podge all over the coaster.
7.  Allow to dry and recoat with Mod Podge at least two more times.  This seals the paper and you don’t get dark spots on your picture when you pour the resin.
8.  Once all the coats have dried, put some Mod Podge in a disposable cup.  Mix in the white cello glitter.  You want the glitter to be covered, but you want it to be very thick.  Using your mixing stick, put the mixture along the bottom of the shark – where he would be coming out of the water.  The white glitter is supposed to look like the water splashing out around his neck.  Allow to completely dry – I would suggest over night.  If the Mod Podge isn’t completely dry before pouring the next batch of resin, the Mod Podge will become cloudy/milky.  That is minimized with the gloss Mod Podge, but it still won’t be as clear.
9.  I used nail polish, but you could use acrylic paint to add some additional splashes and I used the white to dab on some of the raised areas of the white glitter.  I was just trying to give the splashes some definition.  It’s pretty subtle.
10.  When everything is dry, pour a clear coat of resin – enough to give it a flat surface and let it cure a minimum of 12 hours before unmolding.


That’s it!  Thanks for stopping by!  Happy Crafting!  Keep both eyes open if you go swimming in the ocean!