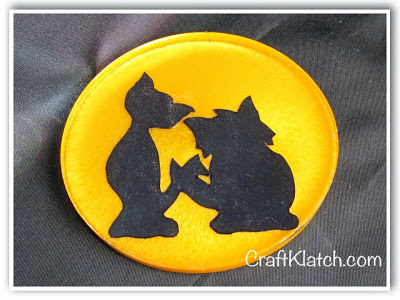 I have two cats, Spooky and Pouffy.  Spooky is a girl and she showed up 11 years ago and never left.  Pouffy showed up two and a half years ago and never left.  We don’t know Spooky’s history, but she was six months to a year when she arrived.  She was small, skinny and so happy to have a home.  She had been spayed, but had a hernia that would have eventually killed her.  Pouffy, we found out, had been rescued as a baby on the streets of Chicago, was socialized and adopted out near where we live.  He has a long and complicated story, but the condensed version is he was adopted by a family and then kicked out and left to fend for himself, in the middle of a cold and treacherous Chicago winter.  He somehow befriended a feral cat and they both came and lived in our garage.  Pouffy was literally skin and bones and terrified of people.  Not knowing Pouffy’s history, we thought they might both be feral cats and trapped them and took them in to get fixed.  It turns out Pouffy had been fixed, but Amber was a true feral cat.  We tried to socialize them with Spooky, but Amber decided to leave one day.  It was like he brought Pouffy to us and made sure he was going to be okay and then went back on to live his life.  So that is how Pouffy and Spooky came to be and this drawing I did, long before Pouffy arrived, reminds me of them.  It’s been a long two and a half years trying to get them to get along.  Pouffy is super sweet and wants to be Spooky’s shadow and Spooky doesn’t know how to deal with another cat.  But Pouffy is nothing, if not persistent and he’ll win her over eventually!  They have come a long way and overall they are good.  We still think of Amber often and hope he is okay!


This is what you will need to make the coaster:
–  A drawing or artwork
–  Coaster mold
–  Resin (Easy Cast or Envirotex Lite work well)
–  Yellow or gold pigment powder
–  Super Gloss Mod Podge


Here are some items from Amazon, incase you want to give it a try:


Here is the video tutorial:

1.  I scanned my artwork into my computer and sized it.  I then printed it out with a laser printer, on cardstock.  Those are just my preferences.
2.  Prepare your resin, according to the package directions, and mix in pigment powder in the color of your choice.
3.  Pour into mold.  Allow to cure a minimum of 12 hours.
4.  Take your artwork and Mod Podge it onto the resin.  I first put a layer of Mod Podge all over the resin, then on the back of my artwork and then put it on the coaster and add more Mod Podge all over.  Once it has Mod Podge all over, I use my finger to rub it down and remove any bubbles.  Allow to completely dry and do on or two more coats.
5.  Once it is COMPLETELY dry, prepare more resin and pour it over the coaster.  Allow to cure.

That’s it!  Now you have a one of a kind coaster!!

Thanks for stopping by and Happy Crafting!  Stay safe!